The Grand LA is a Frank Gehry designed, mixed-use development at the core of Downtown Los Angeles’s landmark cultural scene. The two-tower development includes a hotel, residential units, commercial and restaurant/retail space, and grand public spaces. The Grand LA is a crucial part of a larger integrated development that includes the Walt Disney Concert Hall and Colburn School, as well as future projects all designed by Frank Gehry. 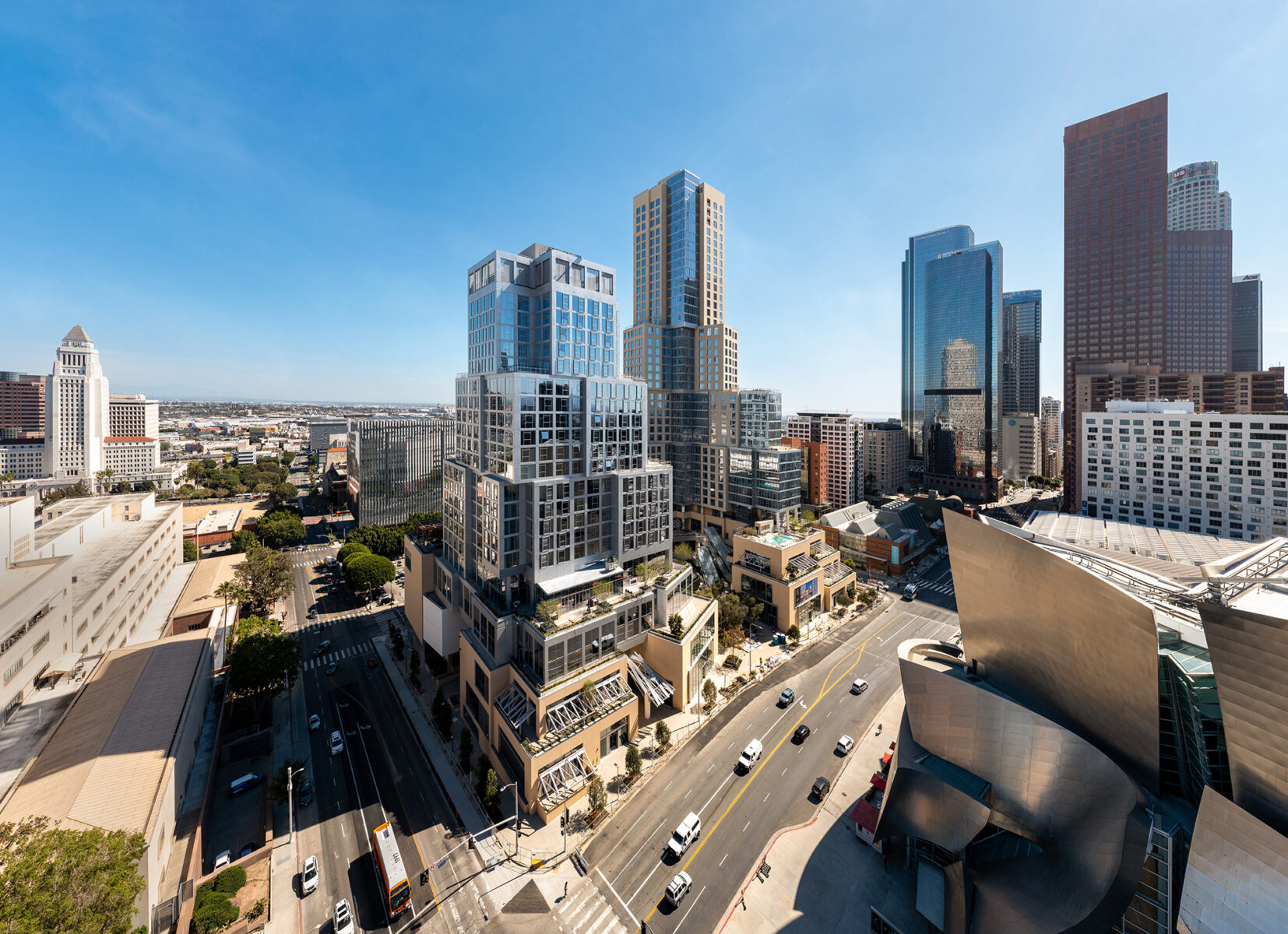 The design of The Grand allows for beautiful sightlines of the Walt Disney Concert Hall and includes 176,000 square feet of retail and dining space and more than 400 residences.

The Grand LA features the 28-story Conrad Hotel, which is the brand’s first resort in California. When you arrive, you experience the intricacies of the project as you proceed through the 53-foot-high entryway. 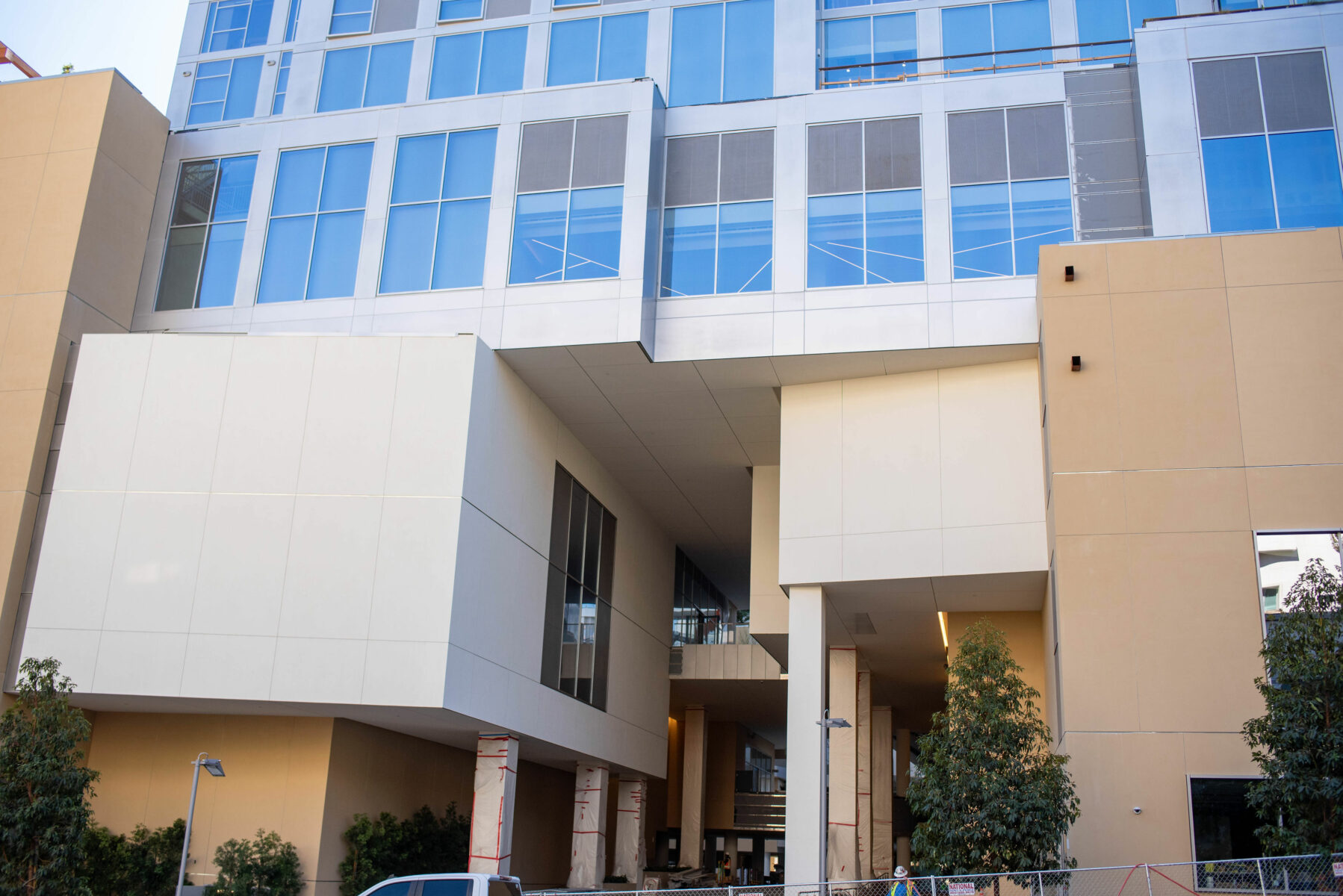 The hotel includes an extravagant amenity deck with a beautiful timber trellis, which Raymond constructed. The timbers measure as large as 15 inches x 15 inches x 40 feet and 3,000 pounds. To build the trellis, Raymond set up a prefabrication area offsite with an Alaskan Mills timber sawmill. Cuts were made into the timbers (kerfs) and then structural stainless-steel kerfs were installed. A crane set the timbers in place onsite and our craftsmen went to work patching any cuts or dings and stained and sealed the entire trellis. A lot of coordination went into the design, assembly, and safety of the timber trellis scope. Raymond first designed the trellis using Building Information Modeling (BIM) and built a small mockup inviting the mechanical, electrical and plumbing trades to install their lighting, heaters, fans, and fire sprinkler lines. The trellis is a beautiful addition to the hotel and to the Los Angeles skyline. 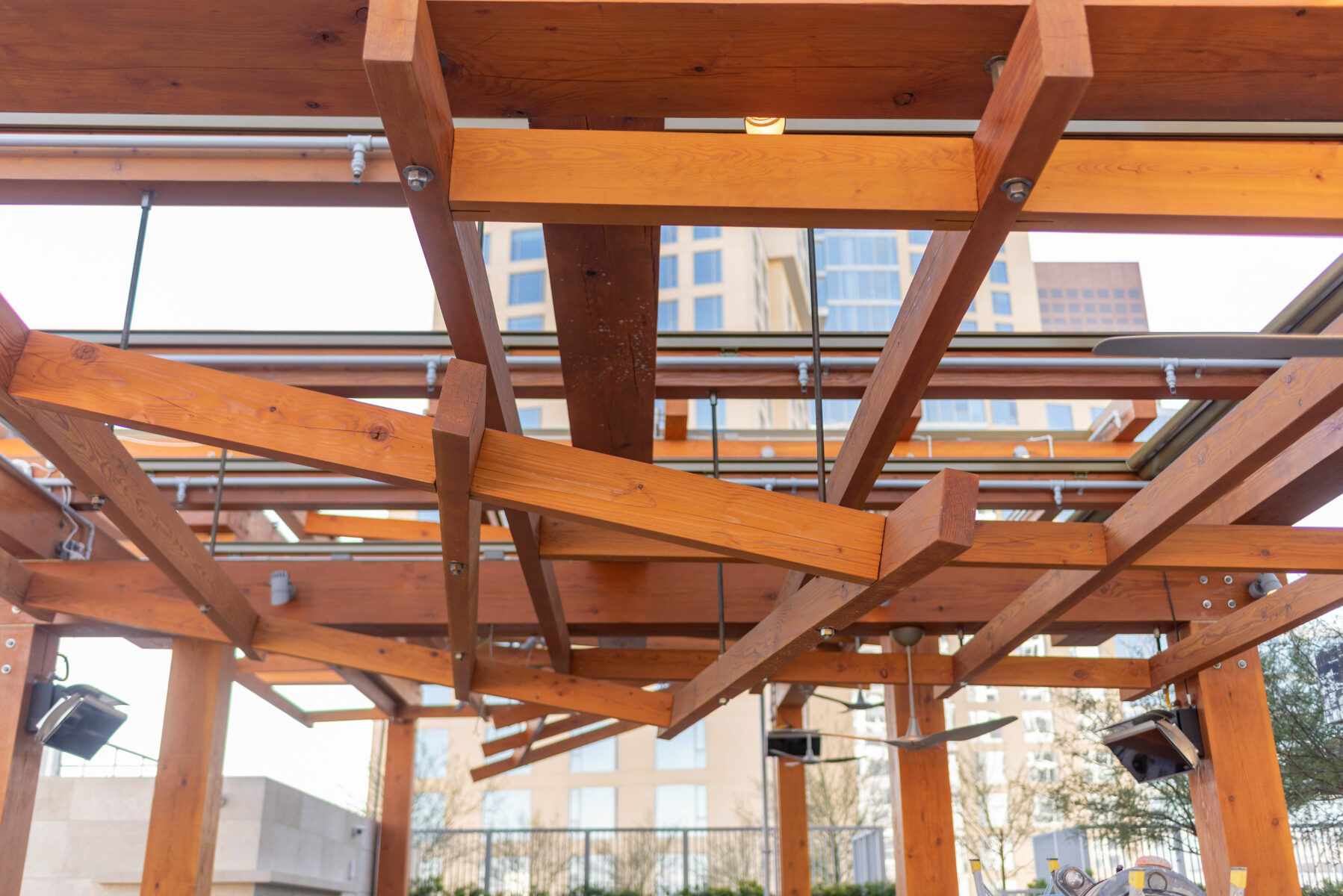 Raymond also built a luxury sauna spa as one of the amenities of the hotel. 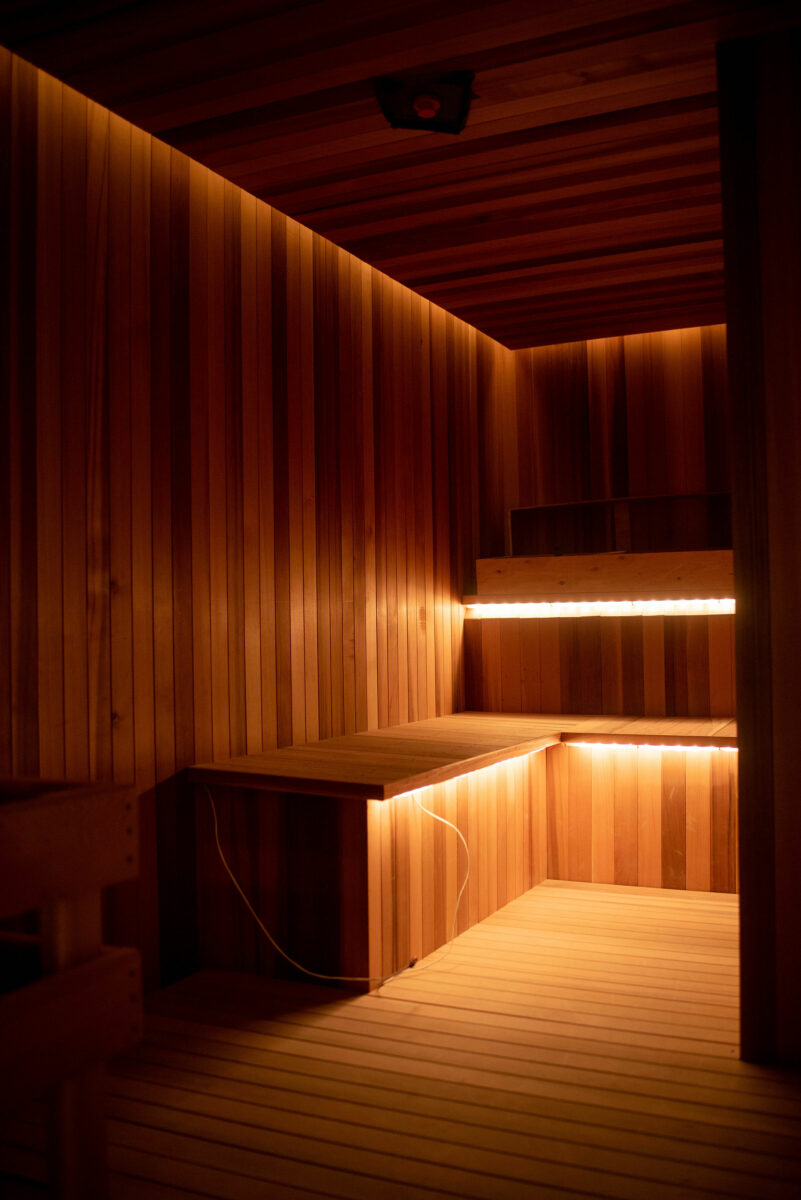 Raymond erected the exterior scaffold on the project that was 100 feet high in many locations and included cantilevered scaffold more than 30-stories in the air. Raymond provided framing, sheathing, weather barrier, and over 30,000 yards of a four-coat plaster system for the Podium levels, roofs, amenity decks, and various transition decks. A Direct-applied Exterior Finish System was provided for all plaster lids and many columns on the job.

The Grand LA includes a beautiful Monumental Stair that links the lower level at Olive Street with the main levels of the building at Grand Street. Raymond framed and sheathed the soffit and walls of the Stair. 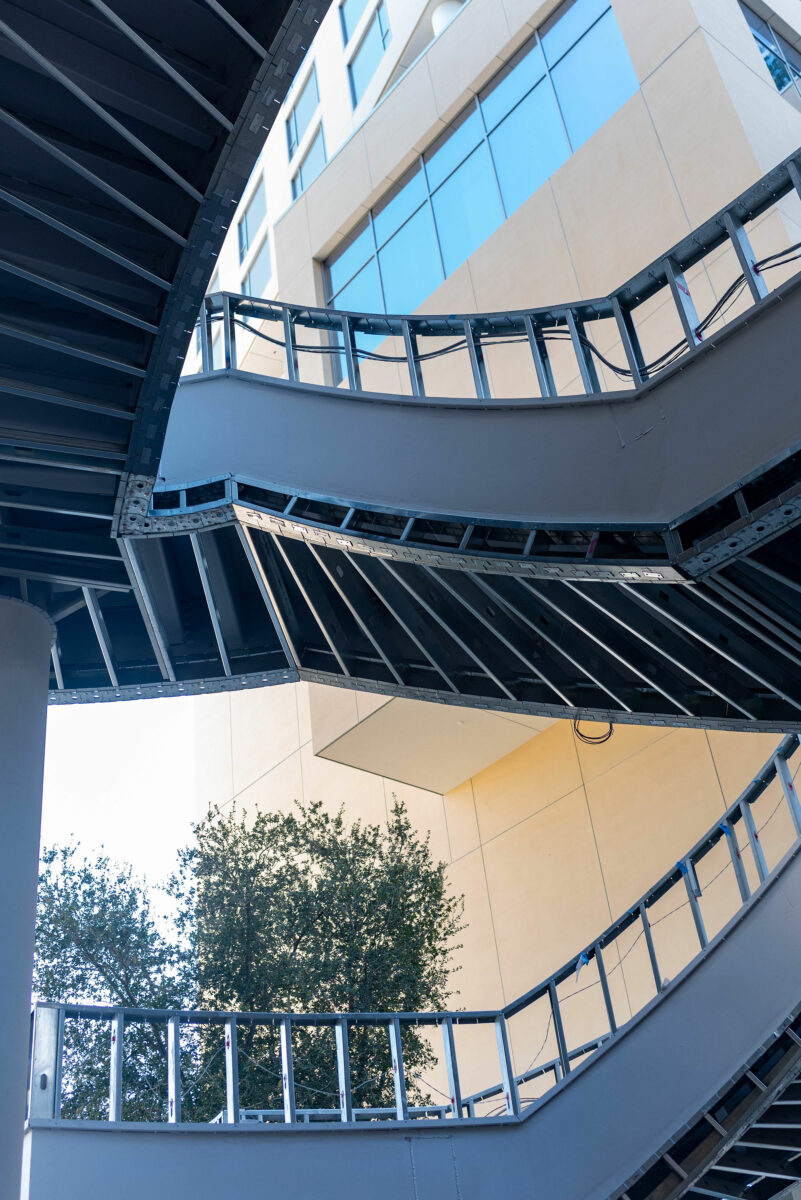 The plaster scope on the project was challenging due to many segmented areas that breakup the main entryway, podium, and each tower. It took a lot of coordination to plan out where to place scaffolding to not impact the job and reach various areas. There were five different plaster types and colors onsite with site logistics playing a significant role (The Grand LA sits on a large, steep hill with an elevation difference of 30 feet in a 280-foot span).  Raymond had four plaster silos and over 100 workers to install the 30,000 yards of plaster. The project was built primarily off the BIM model in lieu of traditional plans, with both the office and field having access to the model. 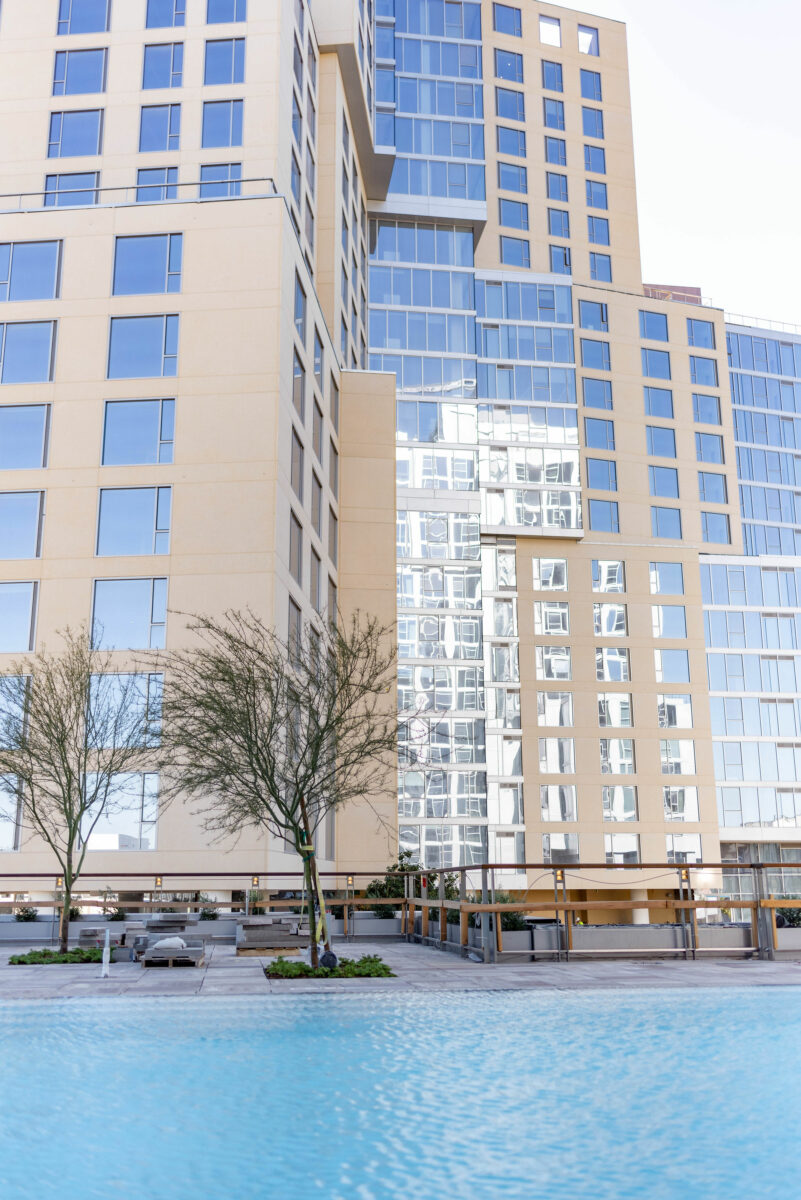 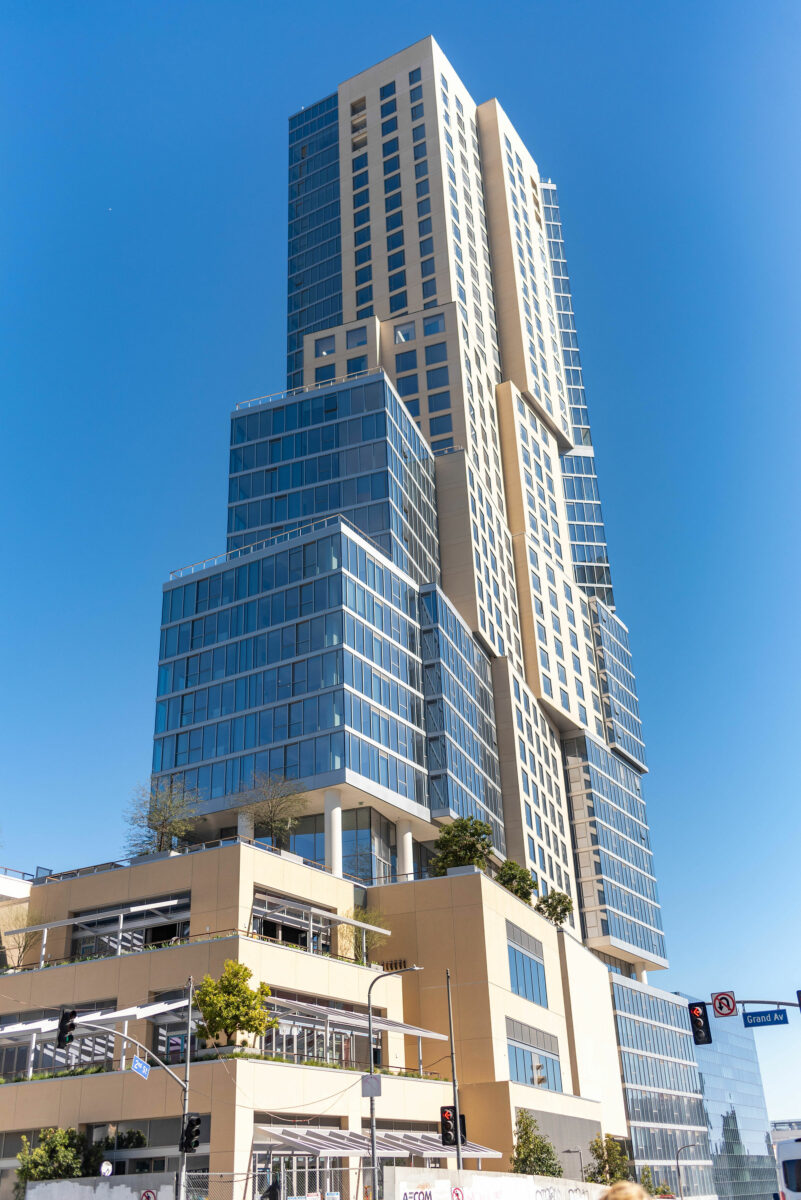 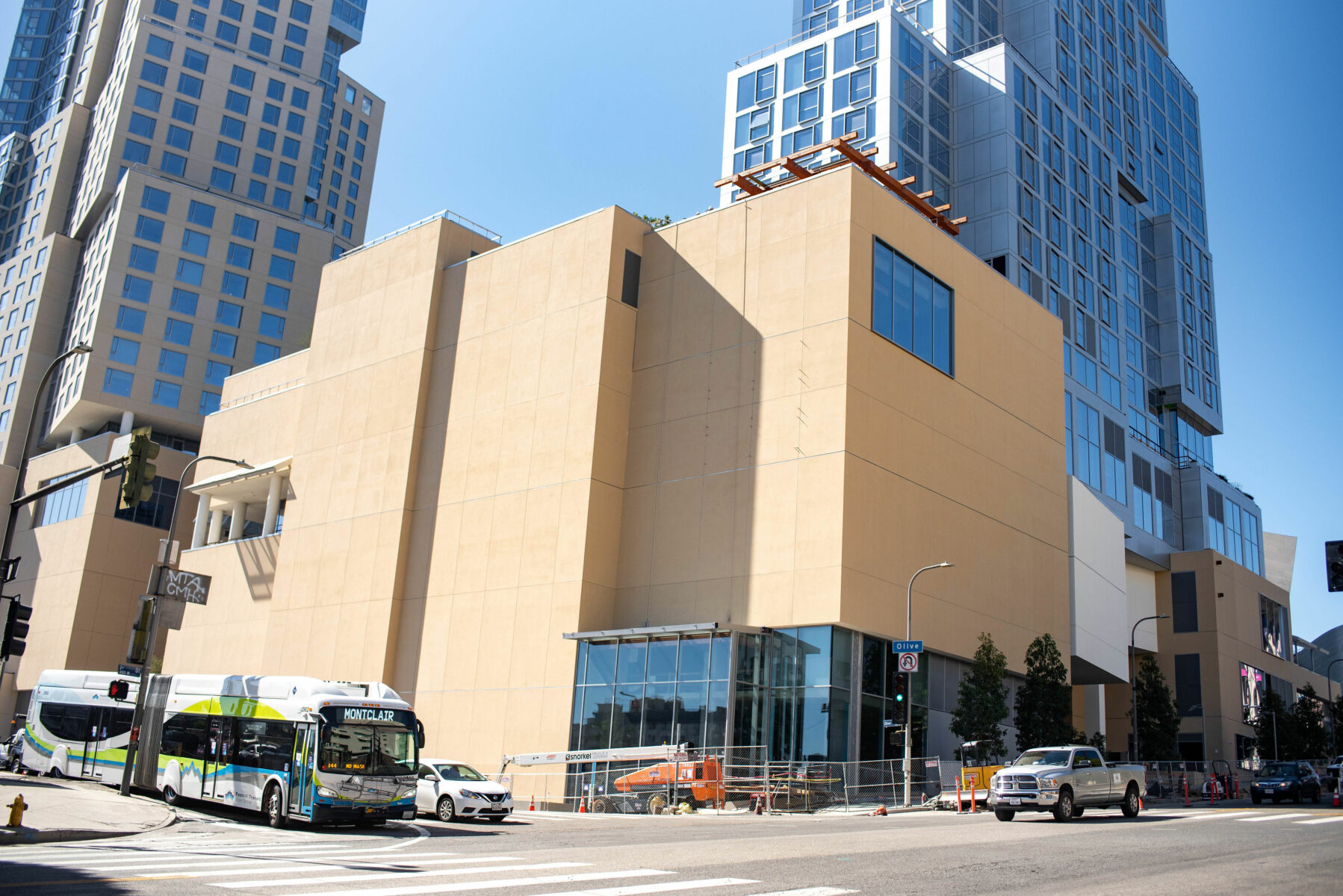 During preconstruction, Raymond identified many products that would prove to be of value to the customer. Raymond used rolls of Structawire Megalath, which on large flat walls increase productivity, and Raymond prefabricated custom flashings for edge of slab conditions and specialty 1-inch custom vent screeds to be used on almost every soffit on the job. Raymond replaced nearly 7,000 lineal feet (1.3 miles) of ½ inch steel plate for metal parapet wall cap support. Much of this work was performed off the building maintenance unit, a small crane at the top of each tower that was used to wash windows.